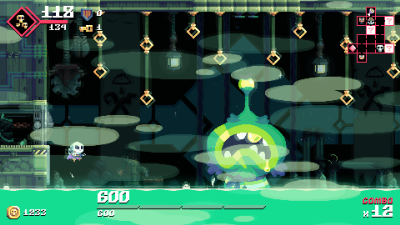 Vorace Horace is one of the Cursed Captains aboard the Ghost Ships.

"Once one of the most refined palates in the cosmos , Horace stole from the finest eateries of the fleet... Until his ship, the Bon Vivant got pulled into a black hole! But the one-eyed pirate's passion for the best of life pulled him from death itself! Now trapped aboard a ghost ship, he hopes to get his tentacles on one more tasty morsel of food. Sadly, his spectral form prevents him from eating anything but souls, which are horrible to his taste buds."

Keep to the ceiling as the floor is toxic goop that will damage for 10 hp (or more) per hit. Vorace has one attack, he will forewarn by poking tentacles out of toxic goop slightly before slamming them towards ceiling. Flinthook to safety, hover above Vorace's head, slow time, shoot down and repeat. Slow time and damage buffing perks can help make the fight quicker, Pepper Shot or Double Barrel perks come to mind. Down dash perk makes an easy fight of this boss.