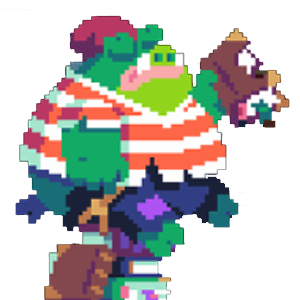 Tobert Ungarsson is responsible for the book shops in Flinthook. Can be found through the Librarius Level Modifier.

"Many scholars think knowledge was the greatest wealth a person could have... And Barnaby Quasar agreed! Called the "page Pirate" or "Book Bandit", this erudite swashbuckler raided ships for books, pamphlets and scrolls! He later donated his bounty across the fleet, hoping to bring the stories and legends of the Mermaidon Galaxy to his fellow pirates.

Sadly, most pirates prefer gambling, fighting and burping to actual reading and as such, Quasar's treasures go unread."